Hey! I’m Talking To You

Arthur C. Clark and Stanley Kubrick predicted it with 2001: A Space Odyssey’s Hal 9000 computer, as people interacted with the machine by voice commands. “Open the pod bay doors, Hal” has given way in today’s world to “Alexa, read my mail.” “Ok, Google, play my music.” “Hey, Cortana, what’s on my schedule?” “Hey, Siri, how’s the weather?” and “Bixby, check my stocks.”

More and more people have found themselves uttering something along these lines lately as digital assistants are becoming more ubiquitous in daily life. These features are not just an outcropping of cell phones, but have actually become stand alone services; some with separate devices that operate independent of a phone or tablet.

Apple started the trend when they launched Siri on the iPhone 4S with iOS 5. Several programmers tried to copy Siri for Android phones, but none met with the success Apple enjoyed. Samsung launched S-voice shortly after with the Galaxy S-3, but it’s was not widely accepted by users. There were a few app developers that tried to make device agnostic personal assistants for phones, but none met with Siri’s success. Until Google.

Google’s voice to text system is built into every Android system and works every bit as reliably as Siri. Android-based phones, even phones who try to add their own voice command systems, can access the Google voice system by saying “OK, Google.” It is cloud based, but also backed up by a dedicated team of people who constantly monitor the voice traffic to ensure even the most mumble mouthed commands get understood.

The battle might have remained between Siri and Google had Amazon not expanded the border conflict beyond phone handsets when they introduced the Echo. The small canister shaped device is essentially a voiced-operated, sound-based internet device with no visual user interface aside from a glowing ring. The flagship device is about 7 inches tall with omni-directional, far-field microphones and an adequate speaker for listening to music. It’s assistant is Alexa and users can access the system simply by calling her name. No need to push a button, or even use an interjection like “Hey” or “OK.”

Windows has entered the fray with Cortana, first introduced on Windows 8 phones, then on all versions of Windows 10 for phone, tablet or PC. While Siri, Google and Alexa have voices that are computer generated, Cortana’s voice is that of an actual human being. The name and the voice are taken from Microsoft’s hugely successful Halo game series.

I have tried these systems and, after wrestling with the burgeoning tech for more than a year, I have come to some conclusions. The tech is here to stay. The real question is which one is the best and most successful in what it does. I’ve lined up the five I have tried.

Number 5. With the launch of the Galaxy S-8, Samsung revamped their failed S-voice experiment, added some features and rebranded it as Bixby and have included it on every handset since, clearly aiming to be the Siri for Android. Or at least for the Galaxy line of phones, anyway. Bixby is no longer just the personal assistant, it now drives all Text to Voice applications on the Galaxy line. Sadly, though, it doesn’t do it well.

Of all the voice assistants, Bixby falls flattest. I have used Bixby in my brand new Galaxy Note 8 and just today fully disabled it from the phone. Its engine is slow to respond, does not accurately render the text that is spoken, even when it is spoken slowly and clearly, and often generates gibberish, spelling out the punctuation instead of adding it correctly period (.)

Number 4. Cortana is not bad, but not as robust as the others. Perhaps because its responses are recorded and not generated, or perhaps because it doesn’t have a cadre of technicians monitoring the inputs, but often, Cortana defaults to a generic web search (using Bing—the Bixby of web search engines) for its returns. She does understand better than Bixby, she just doesn’t do as much as Siri or Google, and she is a bit slower rendering the text.

Number 3. I use an iphone for work, but rarely actually use it for anything other than checking my work email, so I am not dependant on Siri. I have experimented with her to see how accurate she is in her text renderings, and she is useful in that regard. I don’t, however, miss her when I don’t use the phone. Even if one has a smart home system that Siri can control, it still requires the iPhone or iPad to do it, because there is no stand alone device for Siri yet. I hear there is talks to incorporate Siri into the Apple TV remote. Perhaps that will be an improvement. I’ll let all the Apple acolytes defend her position in the voice assistant rankings, but for my list, she is in the middle.

Number 2. The real battle for dominance is for the two assistants that are not bound to hand sets. Google just launched their Google Home product line with devices almost identical to the Amazon Echo. These devices now work just like the Google app on the phone, but without a web browser interface. It has the same network that gives Google its dominance in the web search market and it is amazingly accurate in how it listens and interprets voice. Using the phone, a user can watch the app correct a listening mistake to provide the correct information or perform the desired action. Google rarely makes a mistake in the voice interpretation. It does make mistakes in the results, however, just like it always has. But those mistakes are very few and far between. 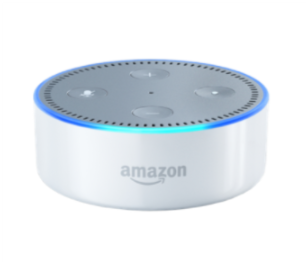 Number 1. Alexa was designed by Amazon to work with users’ Amazon accounts. Remember that Amazon is, first and foremost, a shopping retailer. It seems Echo’s goal was similar to the goal of the Dash buttons; to make it quick and easy to order things from Amazon. With the Echo, one can order and play new music from the Prime playlists, reorder any item in the users order history and access the Amazon Prime video system to playback on smart TV or the Amazon Echo View device. If this was where the system stopped, it would rank below Siri in its usability, but Amazon didn’t stop there. With the Echo, Amazon opened the API to developers to create what Amazon calls “Skills” for Alexa. Echo can interact with Samsung’s Smartthings system for home automation, access iHeart radio stations, play games and many more things. On top of those things, Amazon gave Alexa some personality too. She responds to “Good Morning” with some interesting tidbits of information for the day. She tells jokes and even sings songs.

As technology creeps ever further into our daily lives, many people become more dependent on the services systems like these offer. My home has sensors that turn lights on automatically, preventing the stubbed toe from fumbling around in the middle of the night in the dark, interconnected thermostat so I can monitor and adjust the temperature from anywhere, and connected door locks that alert me when they are opened, or that I can lock and unlock from anywhere. Will we come to the day where society comes to a grinding halt if the systems go down? Some people will lose their minds when their assistants disappear into the cloud from whence they came, I have no doubt. I like to think I can adapt and get by without Cortana and Alexa if they go down. But for some, they live in fear of Skynet taking over.

“I’m sorry, but the Government has mandated a minimum of 76 degrees for energy conservation.”

Or worse, finding themselves locked out of their homes.

Like Dave Bowman, the sole survivor of 2001: A Space Odyssey, I still know how to pull the plug.